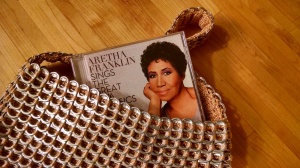 I must have heard some Aretha songs growing up – both of my parents loved Motown-style music.  But the first time I remember really noticing Aretha was in the Blues Brothers movie.  She was beautiful and strong, with an amazing voice!  When my cousin suggested this Great Diva Classics cover album for an RMC review, I was excited to give it a try.

I was especially delighted by the opening strains of “At Last”, because this song always reminds me of every wedding first dance – or stereotypical wedding movie first dance – of all time.  Listening to this, I wanted to feel like I was no longer in my Prius, but in some generic hotel ballroom with round white tablecloths and 90s floral/feather centerpieces.  But something was missing – I felt nothing!  The emotion and awww factor of the Etta James version was just not there.  It was then that I realized an album of Aretha covering popular Diva hits would probably never be as great as listening to the original recordings, even if it is ARETHA and she is wonderful.

Of course there are some redeeming moments on this Diva collection.  For example, the cover of Adelle’s “Rolling in the Deep” is actually better than the original, in my opinion!  Really fun to listen to (and to sing of course).  “No One” (originally performed by Alicia Keys) is well-sung by Aretha in this version, which has an extra reggae/islander feel that will make you long for warmer weather.  “Midnight Train to Georgia” is fine here, but it just did not really wow me, because I love the Gladys Night song and I think is just perfect as it already is.  It can’t really be improved upon – sorry.

“Nothing Compares 2 U” was kind of a (bad) surprise on this album, 1) because I didn’t realize that Sinead O’Connor was considered a classic “Diva”, and 2) because the cover is just all wrong.   The tempo is jazzy, the melody becomes somehow upbeat (isn’t this supposed to be a sad song?) – so the originally haunting, memorable chorus is now barely recognizable.  And maybe it is unfair for me to complain about “Teach Me Tonight” and “People”, because I have never liked those songs anyhow.  I really, really tried to give each of them a fair listen in the car ride home this past week, but I did not really enjoy it.

I hate to say this (because I think Aretha is amazing!) but this album gets a barely passing grade at almost a C –  not because it is all horrible, but mostly because there is just really no reason to purchase this or listen to it.  If you like these songs, then the original versions are great as they are.  If you really like Aretha, you probably should just pick up some of her own recordings that she is famous for, and maybe buy the single MP3 for “Rolling in the Deep” to hear her try something new.

Link to Amazon for purchase details: