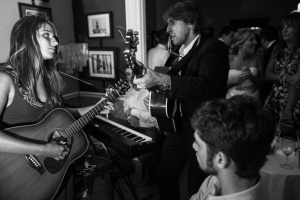 (*Image pulled from https://audreyandchris.bandcamp.com/ – not taken by RMC)

Looking for something folky but not too bluegrass or country?  This is the perfect album.  I loved every precious second of the seven short tracks on this self-titled debut from charming duo Audrey Snow and Chris Gillin-Schwartz, known simply as Audrey and Chris.  I couldn’t find a ton of information about them, but apparently they are from Cape May, New Jersey – which is also extremely charming.

They open with one of their strongest songs – “Dissipate”.  I love the beautiful lyrics, and slow but simple guitar.  Apparently Audrey can really sing! She has a mellow, low, soulful voice that reminds me of Susan Tedeschi and Fiona Apple.  She really belts it out on the heartfelt chorus when the banjo kicks in.  Did I mention that I love this song?  In fact, there really isn’t a bad one on this album.

The second track reminds me of the excellent Ryan Bingham songs from the “Crazy Heart” soundtrack, complete with the gravely whiskey dude voice that totally fits a song called “Down the Line” – it is perfect!  It has a bright, open guitar sound and lots of harmonica.

Track #3 is called “Elliot” and is pretty depressing if you think about it.  I would describe it as a cross between Nirvana and Eliot Smith, in terms of both content and sound.  Well done, but dark.  I suggest that you experience it fully, then continue on to something lighter!  You can move on to the next track that again showcases Audrey’s amazing voice.  The vocal style of “Hold Out” is reminiscent of Shawn Colvin with a little Sheryl Crow mixed in – but this track is more upbeat in tempo (if not in tone) than the opening Audrey song.

Track #5 “Maybe” perhaps is the best example of Audrey’s Fiona style because it highlights just her voice roaming over a basic guitar.  And then there is “Late Night” – A sultry and rhythmic duet between Audrey and Chris, with a standard format but unpredictable harmonies; and of course plenty of tambourine (this is a folk album, after all).

The last wonderful song is called “Moon Man”.   This actually seems like it could belong on another album I recently reviewed by The Hand and the Heart, in terms of style and caliber.  Chris takes the lead on this melancholy indie-folk ballad (that is loosely trying to run with the spaceman theme first carried by David Bowie and Elton John…).  Really a very short song (like tracks 3 and 5) but a sweet little number and a great way to wrap things up.  A+ for effort, execution, and heart!  I really hope they come out with more music very soon.

Link to Album on Reverbnation:

Link to Album on BandCamp: