No Cities To Love – By Sleater-Kinney 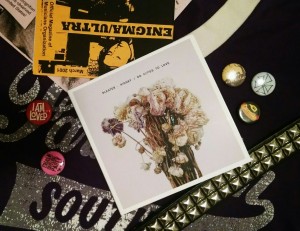 I don’t remember when I heard that Sleater-Kinney was putting out a new album; I think someone mentioned it in passing, and I was only vaguely interested.  I was only vaguely interested, because I am getting old and I was confusing Sleater-Kinney with Rilo Kiley – still fun but “meh” by comparison.  When I saw the No Cities To Love album on a Pitchfork list a few weeks later, I was super excited to check it out!  So fun to remember an edgier, indier time when Carrie Brownstein was making her own way with a guitar (she is more than just a funny sidekick with a cute haircut on Portlandia).

The musical styling is of course very similar to Bratmobile (Google both bands if you need a refresher on riot grrrl music and culture) with lots of punky rock and nary a slow, gentle song in the mix.  But I also heard the influence of one of my personal female heroes – Patti Smith.  The poetic chanting, sometimes yelling, sometimes singing with a loud and not-so-sweet-yet-seriously-feminine voice is so powerful and so familiar.

The album opens with “Price Tag’, which is of course about the high prices we are paying every day for our modern lifestyles.  There are middle-aged mom references (“I scramble eggs / for little legs”) but good descriptive verses you can feel (“the fabrics itch / the fit’s a little rough”) and no lack of rock.  The vocals here are similar to Gwen Stefani if you need a fairly recognizable comparison – strained and emotional, but still capable of evoking a vibrato.

“Fangless” is dancy and energetic, with upbeat backing vocals that make you feel like this song could really be from any decade.  The guitars remind me of Franz Ferdinand and the Strokes, but of course these gals came wayyyyyyy before those guys!  And track #4 is the type of rock anthem that you’d want to scream along with during a live show – “we win, we lose / only together do we break the rules”.  The title track “No Cities to Love” is something that will definitely get stuck in your head – the vocals are more yelled than sung, with jazzy guitar interjections and a line about a “walk-off” that for some reason conjures images of David Bowie…

I think track #5 “A New Wave” is my favorite, and not just because of the fun name.  The opening guitar is just awesome, rippin’ and wailin’ you into a frenzy of female resistance by rock – “I am raw material / Make me plastic, make me fuel / I can be… I can be all.”  But I also really love the next one, “No Anthems” because it is sorta creepy; sorta minor in key and breathy in voice before launching into the bridge – supported mostly by an aggressive drum break.  “Gimme Love” might seem like a Rolling Stones song title, but I think this is one of the most Bratmobile of them all – abstract guitars and powerful, percussive singing.

“Bury our Friends” is probably my least favorite because I have not listened to it as much as the others (I usually start at the first track when turning on the ol’ Prius) but I think this is also the most Patti Smith in style – you can just imagine her singing along in bare feet with hands outstretched in solidarity.  “Hey Darling” is a little sassy and a little more singerly; again with the Gwen vibrato and flirty-yet-careless breakup song vibe.  The album ends with a song fittingly called “Fade” which also is not one of my favorites, since it is a little slower, less melodic and more esoteric – but still it is hard to complain about 10 songs of welcome rock that hold up not only to nostalgia, but also against anything that is being played and produced this year.

No Cities To Love will not disappoint you – it is of course more polished and better produced than some of the stuff you were listening to in the 90s, but it still is just packed with razory guitars, raucously-belted girl-power vocals, and hard hitting drums.  Every single song took me back to the one time I was lucky enough to see Bratmobile open for the Donnas – and back to the days of thrift store t-shirts, greasy shag haircuts, stapling up band flyers, handing out stickers, and collecting little pins (for your hoodie or messenger bag, of course).  An authentic and fun point in time – for music, art, and good rock bands that are worth re-discovering time and again.

Link to Purchase Album on Amazon: