Rags Across the Sun by Neil Holyoak* 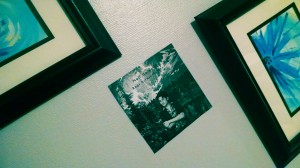 Press the play button on Neil Holyoak’s release Rags Across the Sun and right away, you’ll be pulled into sounds of something something warm and familiar, giving you a wistful yet free “arm-out-the window-on-a-country-drive-in-the-summer” kind of feeling.

Imagine a fresher, livelier version of Townes Van Zandt, and his would-be protégé M. Ward; sprinkled with the occasional pedal steel sound thrown in for a country feel.  Neil sings calmly with a mellow and sometimes deadpan delivery – self-admittedly influenced by “teenage heroes” Belle and Sebastian (see bio on his website), sounding a little bit like Iron & Wine but with a voice that is less breathy and more whole, more vintage, more round and full.  Sometimes there’s even a hint of a young Neil Young sound and even style peeking through.

Each song is  a bit different from the next; some are more simple and stripped down than the rest – with delicious names like “Sidereal Sunrise”, “Fancy Moonlight”, Silvery Skies”, and “Red Queen of Autumn”.  Neil’s bio also mentions he was inspired by the Smiths – and the honest, straightforward lyrics certain reveal the same sort of vulnerability that is vocally and verbally thrown to the wind by Morrissey (while sounding completely different, of course).

Upon my first listen to the full album, I found that I happily enjoying each song without really catching many of the lyrics – but when I really tried to focus closely on the words the second time around, I found them surprisingly rich in texture and imagery, like this sample from “Fancy Moonlight”:

I’d rather be an old umbrella, wire silk and fallen leaves

Like a broken cigarillo, draped from old man autumn’s teeth

This seems so mature and introspective for someone who looks so youthful in their promo photos online (http://www.neilholyoak.com/).  From Neil’s bio you gather that he has run into some hard times as a young kid – perhaps this contributes to his ability to really dig deep as a songwriter, and create something you can really experience and feel.  Knowing that he spent his formative years in Montana conjures images of big sky and lonely open spaces just begging to be filled with art, experience, and of course music.  Now he is Montreal-based, so if you are taking a reflective weekend trip to that part of Canada you should see if you can catch one of his shows.

The album features great rhythms that never drag, a smooth voice that never irritates, pleasant musicianship featured in nice quiet instrumental sections that never stretch out too long – the style of each song seems somehow timeless, as thought it could have come from 50 years ago while still being appreciated today.  This is definitely on my list of some of the best music I have heard all year, and I know I will be looking for this album to comfort and inspire me for many listens to come.