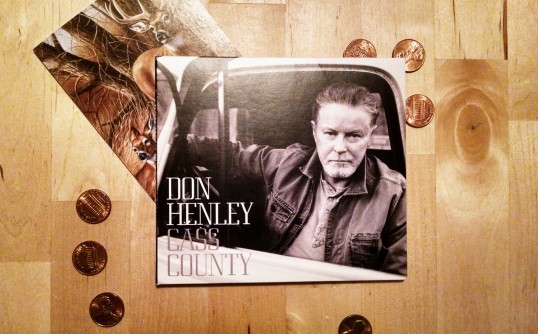 I admit it, I don’t know the significance of the title.  A super-quick Google search revealed Cass Counties all over the U.S., including: Nebraska, North Dakota, Michigan, Nebraska, Indiana, Missouri… Initially I thought it was called “Cass Country” which would be fitting – as this truly a country album.  If you have a problem with this genre of music, then read no further!  Don Henley’s post-Eagles-greatest-hits voice might be a little thinner and reedier (if you can believe that) with time, but it is still so distinctive and familiar that if you loved it then, you will still love it now.

The album opens with “Bramble Rose”, lilting in a sing-songy way that is enjoyable and sweet – until Mick Jagger’s whiny twang breaks through the texture, that is.  You can’t be mad because it is such a fun surprise to hear these two working together, so just go with it!  Next is “The Cost of Living”, which just feels like a good ol’ timey country song – from the Merle Haggard vocals to the down-home, honest-dirt title of the track.

Track #3 is a sentimental, piano-fueled vehicle for Don to warble and whine his way into your older and wiser heart.  Called “Take a Picture of This”, I actually really enjoyed this simple melody and the lyrics – “year here’s a suitcase, here’s a ticket for a plane” –that are so basic yet honest.  “Waiting Tables” is a little corny, and as a tall girl who used to be a waitress, I’m just a tad offended at phrases like “she grew up tall in a timber down”… and “she’s just waiting tables”.  Say what now?!

Thankfully, the next track called “No Thank You” is one of the few upbeat tracks – it has a great honky-tonk line-danceable chorus, and some really hilarious lyrics with plenty of tongue-in-cheek humor.  “Praying for Rain” is slow again – but forgivable in that it is good enough to possibly be one of my favorites on the album.  Honest and straightforward, with a beautiful chorus.

Track #7 (“Words Can Break Your Heart”) is a little cheesy and predictable, but is otherwise a harmless and even bittersweet duet about damaged feelings and lost love.  The trend continues with “That Old Flame” with Martina McBride – not one of my favorites, since there is just nothing really spectacular or noteworthy about this.  Although there is a hint of slightly building momentum with some basic power chords in the background that are very Don Henley…

The album picks up again a bit with “When I Stop Dreaming” – a nostalgic waltz complete with slide guitars, and the familiar and lovely warble of Ms. Dolly Parton.  And Don’s performance on “A Younger Man” is sweet and gentle, as he croons “I aint a knight in shining armor… you’re lookin’ for a younger man, not me”.  But again this feels a little predictable, obvious and slow in the rhyming of the chorus and the cadence of the melody.

Now “Train in the Distance” is a stripped-down and bluegrassy song, evoking “summer nights at grandma’s house, cozy in my bed  / I dreamed of other places swirling in my head.” A piece really heavy, HEAVY on the country nostalgia factor!  Track #12 called “Where I am Now” is sassy and fun, basically an older dude giving the middle finger – or maybe a less aggressive shrug – to the world that thinks he should bother having anything to prove.  It is pretty much the perfect ending to the newest release from this gem of an icon (with an unforgettable voice!) who already has decades of hits under his belt.

It is always great to hear from good ol’ Don – you already know you love him.  So the real treasure nuggets on this CD are the guest appearances, and there are plenty! Each song is a star-studded sing-along featuring some big names on backing vocals.  Mick Jagger, Merle Haggard, Trisha Yearwood, Allison Kraus and many more – they all chime in and lend their style to this pleasant, if not rocking (at all) compilation.  It would make a holiday gift for a wide range of people on your list who have been curious to check this out!